Did you get it yet?

The new vicar of St Swithans had just finished his seminary studies and had been ordained two weeks before he started in the parish.

Parishioners were very excited.  They had waited over a year to secure a new priest.  Now he was here.

On his first Sunday he preached well – a rather moving sermon about the Good Samaritan.  People thanked him warmly at the door and he was rather pleased with himself. 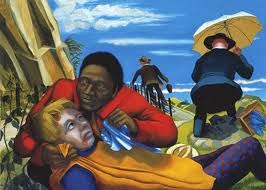 The next week he preached the same sermon – about the Good Samaritan.  He seemed a little more earnest about it, but it was the same sermon.  People still greeted him at the door with some warmth, although he did notice a few people who made their way out through a side entrance, avoiding him.

His third Sunday came around and he preached the same sermon again.  He changed his introductory illustration, and he turned up the level of passion in his speech, but it was the same sermon.  The people who shook his hand on the way out seemed a bit lost for words, and seemed relieved to let go of his hand and move on.

It was time for the Wardens to say something.  They were very kind about it and began by saying that they understood that he was fresh out of seminary and might not have had time to write many sermons, but they just wondered if there was a reason why he had preached the same sermon for three Sundays in a row.

Without the slightest hint of defensiveness he replied:  “When I feel like this sermon has changed the way you are living, then I might move on to a new one.”

I am wondering if, after today, I met be asked to meet with the Warden, because it seems to me that we have been confronted with the same old story these past three weeks – at least from the Old Testament readings.

We began three weeks ago with Micah saying that what God really wanted from us was that we should do JUSTICE, love MERCY, and walk HUMBLY WITH GOD.

Then, last week, Isaiah expanded on that with:

“Is not this the kind of fasting I have chosen:
to loose the chains of injustice
and untie the cords of the yoke,
to set the oppressed free
and break every yoke?” … and a whole string of other social justice things that God expects of us.

Now, this week, we have the same old story all over again.  Despite Deuteronomy being regarded as one of the five books of Moses and therefore part of the Torah – the first Hebrew Canon of Scripture, it was clearly written in the 7th Century BC during the reign of King Josiah, not many years fore the Exile into Babylon.  So it seems written somewhere between the passages we referred to over the past two weeks.  Listen again:

17 For the Lord your God is God of gods and Lord of lords, the great God, mighty and awesome, who shows no partiality and accepts no bribes.  18 He defends the cause of the fatherless and the widow, and loves the foreigner residing among you, giving them food and clothing.  19 And you are to love those who are foreigners, for you yourselves were foreigners in Egypt.  20 Fear the Lord your God and serve him.

So it seems to me that there is a common theme here and it will be very useful as we prepare for our Parish Consultation over the next couple of weekends.

These Old Testament prophets are in complete harmony with the teaching of Jesus when they remind us that God wants action, not self-righteousness.  God wants us to do stuff rather than show that we have orthodox beliefs.

I am not sure if any of you have come across people who are Quakers before.  They prefer to call themselves The Society of Friends.  I know that some Christians are unwilling to accept that they are Christian because they are a bit vague on their doctrines.

They are members of the Council of Churches of WA and one of them once said to my wife when she was the General Secretary of CCWA that generally Quakers do not care if you believe in fairies at the bottom of the garden, but they do care about how you live your life – embodying the things Jesus called us to do.

I suspect that some of you would like to think that what you believe is important too – I won’t disagree with you on that – but I do hope you also agree that what you do, how you live is important.  This certainly seems to be the message for us today – and last week – and the week before.

What better preparation could we have for our Parish Consultation than this?

As we consider our situation I am sure that much of our thinking will be directed towards the question “How can we get more people involved with us at Holy Cross?”  That, I think we will find, is a secondary question.

The first question that we will need to consider is what things would we be doing in Hamersley that is an expression of us “defending the cause of the fatherless and the widows, and loving the foreigner residing among us, giving them food and clothing?”

What would we have to do that showed we loved those who were foreigners among us?

Now I don’t mean literally the fatherless and the widow or the aliens who live among us.  These are examples that are leading us into lives in which we

DO JUSTICE
LOVE COMPASSION and
WALK HUMBLY WITH OUR GOD.

These are examples of ways in which we might be loosening the chains of injustice for someone or untying the ropes of oppression for them.

Jesus makes it very clear that as we love one another, as we express our commitment to him by doing these things, his LIGHT will shine from within us and make it clear to everyone who is our LORD.

So, one of our fundamental tasks will be to find a way of understanding what the needs of people are in our area and which ones we might be able to do something about.

Now some of that might involve quiet specific activities with our Nuba people that will help them overcome some of the things that are holding them back – language, qualifications, steady work, etc.  But it will need to be them who tell us what they need help in, not us saying “this or this will be great” and then find they won’t come.

But there are people who actually live here in Hamersley and Warwick whose needs are not being addressed by any community services and this failure to have those needs met leaves them with a poorer life than they should have.

I trust that as we discuss these things together, we will have sufficient information to inform us, and an abundance of faith in the leading and inspiration of the Holy Spirit, that we will be able to see a fantastic future ahead of us doing everything we can to brighten up that light of Christ that will be shining out of us.
Posted by DjittyDjitty at 12:39 AM