I am the Way

I have three different map books in my car.  I have a map book for the City of Perth and Suburbs.  I suppose most of you have that one.

But I also have Country Roads and Tracks of WA.  This has maps of all the roads in the country – even the gravel roads between farms and things.

And I have a map book of Country Towns in WA.  It has street maps for all our towns.

With these three books I can get anywhere I want to in WA.  Before I set out on a journey I like to have an idea of where I am going.  Sometimes once I have looked it up I don’t have to refer to the book again.

I AM THE WAY
In our reading from John today we are reminded of some very famous words of Jesus.  “I am the Way”, he said.  What do you think he meant by that?

Let’s not consider this as a statement that stands in isolation from a context.  John has placed these words within a story that has a very clear purpose for his readers.  The people who chose the others readings to accompany this one understood this, too.

If we were to say what the big theme for today is it would be “Don’t worry”.

We need to remember that John is writing this some 50 years after the first Easter.  By this time he has seen the kind of trouble the early church would have to struggle with.  They faced persecution from two directions.  The Romans saw them as trouble makers and as traitors to the Emperor.  The Jews saw them as heretics.  Life as a Christian was not going to be easy.

When most of us read the opening comments of Jesus about “dwelling places” we almost always think about heaven – our home after this life has ended.  Maybe that is what John intended.  But there is another idea embodied in this term “dwelling places”.  It can also be referring to a resting place along the way.

Some of you may have read that epic tale of JRR Tolkein, “The Lord of the Rings”. 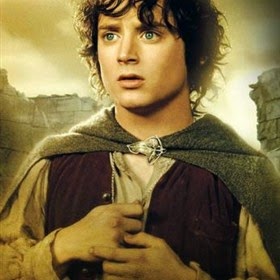 Frodo and his friends embark on the journey Gandalf has charged them with.  After their first battle encounter they are taken to Rivendell, where the Elf-King lives, for what was a long rest.  The subsequent battles get worse and the resting place stays get shorter.  In this there seems to be a parable of our journey along the Way of Jesus.

So, when Jesus refers to resting places, could it be that John wants his readers to be reassured in this life, not about the life to come?

So Jesus says these words we all love so much.

But Thomas and Philip wanted more instructions.  He wanted a bit more detail.  Now I don’t know about you but when you are in a situation where you are asking someone the way, which would you prefer?

Or someone who says:

Jesus is saying the second one to us.  “I am going that way.  Come with me.”

This is actually the simplest starting point for all Christians.  When you sing up to be a Christian there is no contract with pages and pages of fine-print – spelling out the conditions that apply.

All you have to grasp a hold of is the “B” word – BELIEVE.  Believe in God.  Believe in Jesus.  And when you believe in God it changes everything.  Just ask someone who doesn’t believe in God what they make of life.  Their answers won’t satisfy you like the prospect of living in relationship to God the Father and Jesus.

I want to speak particularly to those of you where were Confirmed by the Archbishop so recently.  But I think the rest of us have things we might need to hear too.

When you said you wanted to be baptised, or confirmed, you were obviously saying that you believe in Jesus.  How could you not?  But what happens next?

Some people think that when you become a Christian you have to be good.  This thought gets them into lots of trouble because they then start asking: “what are the rules?”  This is a bit like Thomas’ and Phillip’s questions.  But Jesus says simply “Believe in me.”

Okay, so you say you believe in Jesus.  I think there are three key ways you show that:


And if nothing else, our story today is saying to us we will never be alone.  If we accept that Jesus is the way, if we believe in him, then nothing will ever get in the way of us being with God.

Let me finish with some words that are much more recent than these stories we have read today.  A little over 100 years ago Minnie Louise Haskins wrote these words:

And I said to the man
who stood by the gate of the year:
Give me a light that I may tread safely into the unknown.
And he replied:
Go out into the darkness
and put your hand in the Hand of God.
That shall be to you better than a light


and safer than a known way.
Posted by DjittyDjitty at 2:13 AM