Season of Creation 1 - Year B

While many planets have solid matter that is similar to soil and rocks, it is the water and the magical mix of the right gases in our air that make life possible.  When the space probe landed no Mars, what they were most keenly looking for was signs of water – H2O – because without it we know that no life forms are possible (at least as we understand life). 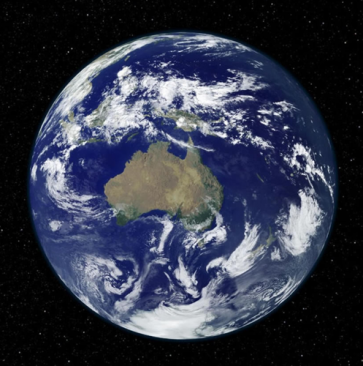 These elements are the stuff of which the Earth is made.  They are also the stuff used by God in Genesis Two to create human beings.  Human flesh was wrought out of earth/dust/clay, water and air.

So we, ourselves are intimately connected to the earth.  At our Ash Wednesday services we say those words “From dust you came and to dust you shall return” and at funerals we say “ashes to ashes, dust to dust.”  These words express that sense of connection between us and the earth.

The remarkable truth of John 1.14 is that God, the Word, ‘became flesh’.

But some of you will be thinking “Isn’t there another element in this ancient scheme of things?”  Well, of course there is.  The fourth element traditionally associated with Earth is fire.

In the Old Testament the visible presence of God called ‘the glory’ appears in fire.  Moses first confronted God in a burning bush.  Then a cloud filled with fire on Mt Sinai marked the presence of God in that place, and a fiery, cloudy pillar led the people throughout their wilderness wanderings.  And wherever the people stopped that same fire cloud dwelt in the tabernacle.  Now there is an interesting link to this in John’s Gospel.

John declares not only that God became flesh—Earth, water, air—but also that in Jesus Christ the Word of God ‘tabernacled’ (or dwelt) among us on Earth.  And in Christ we see not only the flesh of Earth but also the fire, the glory of God’s presence.

This mystery of the incarnation is also the mystery of God becoming part of Earth for us and with us.  This is something that raises within us a sense of awe and wonder and we celebrate God’s connection with us and the earth

Now that is one reason why we celebrate the Earth during the Season of Creation.

At the heart of Psalm 148 is a call for all created things to Praise God.  Look it up as I speak – on p.627 in the pew bibles.  If we were reading it as a congregational Psalm it might begin to feel a bit tedious after a while.  The Psalmist seems to think that every single thing that has been created needs a mention.

And the praise is called forth not just from the animate and sentient beings like us.  Beginning with the sun, the moon and the stars, mountains, seas, fire and rain, then the whole range of creatures that inhabit the earth.  Finally he explores the whole range of humanity – kings and rulers, young men and maidens, old folks and children – let them all praise the Lord.

So today we praise God for the whole creation, but particularly this planet on which we live.  And we join with all of that creation in praising God.

The Lord be with you.

1 Praise the Lord, praise the Lord from heaven:
O praise him in the heights.
2 Praise him, all his angels:
O praise him, all his host.
3 Praise him, sun and moon:
praise him, all you stars of light.
4 Praise him, you highest heaven:
and you waters that are above the heavens.
5 Let them praise the name of the Lord:
for he commanded and they were made.
6 He established them for ever and ever:
he made an ordinance
which shall not pass away.
7 O praise the Lord from the earth:
praise him, you sea-monsters and all deeps;
8 Fire and hail, mist and snow:
and storm-wind fulfilling his command;
9 Mountains and all hills:
fruit trees and all cedars;
10 Beasts of the wild, and all cattle:
creeping things and winged birds;
11 Kings of the earth, and all peoples:
princes, and all rulers of the world;
12 Young men and maidens:
old folk and children together.
13 Let them praise the name of the Lord:
for his name alone is exalted.
14 His glory is above earth and heaven:
and he has lifted high the horn of his people.
15 Therefore he is the praise of all his servants:
of the children of Israel,
a people that is near him.


Praise the Lord.
Posted by Djittydjitty at 12:06 AM