We’re Not Supposed to be Here

There’s a very funny scene in the old film “The Life of Brian” in which there are a large number of women dressed up as men joining in with the crowd in jeering a man who is being stoned to death.  The women had to do this because women were not supposed to be at stonings, and the humour of the story arose when some of the religious authorities began to suspect that there were some women there, but they couldn’t exactly tell. 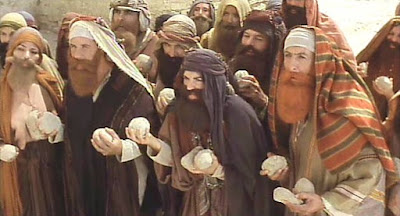 It has been suggested by one of the commentators I read, that our Gospel story today is a case just like that.  Mary in this story was in a place she should not have been.  Our Sudanese will understand this better because they have lived by rules that mean that the men and the women eat separately.  But in this story, Mary crosses the line.

I think John has rather carefully crafted the telling of these stories because there are some nice echoes of the stories of Lazarus and Mary in the chapters that follow.  The death and resurrection of Lazarus pre-figures Jesus own death and resurrection, and Mary's gesture of anointing the feet of Jesus rather than his head as you might expect in such a story, prefigures the teaching of Jesus that will follow when he commands his disciples to follow his example and wash one another’s feet.

The story we are considering happened just after Jesus had raised Lazarus to life and it seems to be the case that it was a direct expression of gratitude to Jesus by the new man Lazarus.   And Mary invades the male space at this meal.  It was not inappropriate for Martha to serve the meal to the men as it seems she did, but Mary’s behaviour was inappropriate – indeed it could have been regarded as scandalous.

John in his telling of the story seems to want to emphasise the extravagance of Mary’s gesture.  The nard she uses was an aromatic essential oil from the Far East so it would have been very expensive and have travelled a long way in the baggage of merchants.  Social mores of the time would have judged Mary’s actions as scandalous – her anointing and gentle wiping of Jesus feet was something that belonged in the bedroom, not a public place like this.

But it is the extravagance of the gesture that incites Judas to words.  He rebukes this woman for invading male space in order to do this to Jesus.

To Judas’ shame, Jesus affirms both the right of Mary to be and what she has chosen to do.  In his eyes Mary is exactly where she should be.  He has made it clear from the beginning of his public ministry that women, children and other powerless people of that day were welcome in his company.  The coming reign of God would be a time and place where all were welcome, all are valued.

This woman who goes where she is not supposed to go is important for another reason.  Her brother Lazarus was dead and now he is alive.  This dinner is to celebrate that barrier-shattering event.  He was dead and the stench that was referred to as coming from his tomb when Jesus arrived – the odour of death – stands in stark contrast to the odour of this costly perfume – a sweet smell of life.

It is reasonable to think that some of the people close to Jesus were aware of how close he was to facing his own death.  They didn’t need to be fortune-tellers.  The signs were clear in the way John tells the story.  So here we have Mary acting as a harbinger of the imminent death of Jesus but crying out for it to be a barrier-shattering event like Lazarus’ death, that his death might somehow be the end of death.

And because we know that in a chapter or two of this story Jesus will teach his disciples something very important, we can say here that this gesture by Mary was an extraordinary example of her modelling the kind of discipleship we are all called to.  Mary has done without being told what Jesus is soon going to do to his friends – wash their feet – drawing them into an intimate relationship with himself, just as he is in an intimate relationship with his Father in heaven.  And it is in this relationship that Jesus removes all of our alienation and estrangement from God.

So this extravagant act of a woman who dared to go where she was not supposed to go heralds one of the most important things Jesus wanted to teach his friends in his last few hours with them.  In a radical call to servant-hood, Jesus commands his friends to do to each other what he had just done for the.  Jesus in this teaching is turning upside down all the social conventions of his day.  When the leaders become the least then the Kingdom of God is here.  When the poor are the recipients of our extravagance then the Kingdom of God is here.

Everything is upside down and understanding when it is that we must go where society says we are not supposed to go is one of the great challenges of our Lenten journey.  There is no getting away from it – following Jesus is a costly thing.  Remember Mary as we move towards Palm Sunday and into Holy Week.  She will be there with us, reminding us that life can come out of death, and that God is always ready to do a new thing – even in us.
Posted by Djittydjitty at 9:56 PM