When I asked that question I wonder if deep down in you, you had a thought of doubt.

“Maybe I am not really good enough.”

The readings we had from Isaiah and Luke today are full of good news for you all, but I know that it is hard for us to get it.

It is really easy for us to live by a set of rules.  We like rules.  If we keep the rules, we will get our reward.  If we break the rules we will miss out .  Maybe even we will get punished.

That is how the people of Israel had come to live.

Sadly, that is how Christians came to live – and very early on.  But Jesus did not give us a set of requirements – of things we had to do – in order to receive God’s blessing.  He turned that system upside down.

Jesus had a lot to say about the rule book of The Law and most of it boiled down to living by the two great commandments – not the 10 Commandments.

Love God with all your heart and mind and soul and strength.

Love your neighbour as yourself.

These are the only rule.

So, keeping the rules will not make you ready.  That is the whole thrust of the reading from the beginning of Isaiah.  What he said God wanted most of us was that we would “see that Justice is done.”  How much of your religious practice is focussed on that?

Let’s have a look at these two Gospel stories we had from Luke 12 today.

“Sell all your belongings and give the money to the poor,” Jesus said.  “Save your riches in Heaven. “

This is a really hard saying.  Most of us have lived our lives doing the opposite of giving our money away – we have tried to earn as much of it as we can. 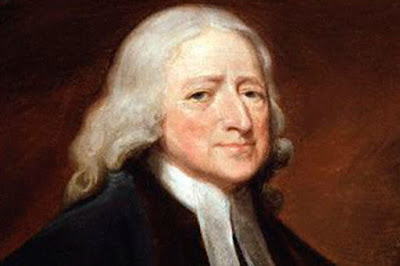 You will have heard of John Wesley, I am sure.  He was an Anglican Priest, but he became the founder of The Methodist Church.

His dad was a Priest and they were very poor.  One day, when John was a young child, he saw his dad being taken away to a debtors’ prison.  So you can imagine Wesley might had made a decision that he was never going to be poor like that.  And he nearly did.

He was lucky enough to go to Oxford University.  He was going to become a priest like his dad but changed his mind to become a teacher at Oxford – that way he wouldn’t be as poor as his dad.

One day he had been out to buy some nice pictures to put on the wall of his room at Oxford.  While he was putting them up the maid came in to clean his room and he noticed that she was freezing because she didn’t have warm clothes.  He reached into his pocket to give her some money to buy a warm jacket when he realised that he didn’t have enough money left after buying those pictures.

He felt very embarrassed because he could almost hear God saying to him “You have adorned your walls with the money which might have sheltered this poor woman from the cold! O justice! O mercy! Are not these pictures the blood of this poor maid?”
This changed his life because from that day on he lived a very frugal life, even though he earned a lot of money at times.  He had learned to live in those days on about £28 a year – labourers earned between £25 and £30 a year.  But some years he had an income in excess of £1,000.  He still lived on £28.  The rest he gave away.

He said one time: “Money never stays with me.  It would burn me if it did.  I throw it out of my hands as soon as possible lest it find some way into my heart.”

I think he understood this teaching of Jesus.

The second story is another one by Jesus that turns the world upside down.  This story is called “The Watchful Servants” in our Good News Bibles.  In this story, the servants who are awake and ready when their master returns in the middle of the night get a big surprise – the master tells them to sit down, he takes of his outside clothes and then makes a meal for them.  This is not the way it is supposed to be.

But this story is clearly telling us that this is the way it will be for us when Jesus returns – if we are ready.

I can almost hear some of you thinking “Oh well, the Second Coming of Jesus is a long way off.  I’m okay.”  And that might be true, but I wonder if there is another way that Jesus comes again.  This might be something that we need to take notice of every day. 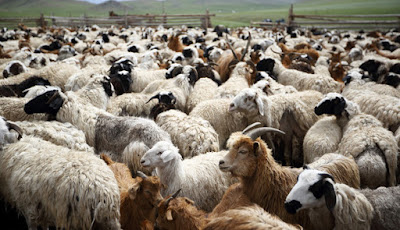 Do you remember that story Jesus told in Matthew 25 about the sheep and the goats?  I don’t think the Nuba people think of sheep as good and goats as bad – but that idea serves Jesus purpose in this story.  In this story Jesus is talking about the final judgement.  I guess most of us would think of this as the time of what we call “The Second Coming”.

He tells the sheep that they will get their reward because they had been kind to him.  They tell him that they never saw him anywhere to be kind to him.  He tells them that every other person they were kind to that was as if they were being kind to him.  What he is telling them is that He comes to us again and again – every day – in the people that we meat during our daily routines.

Those goats didn’t see him either – so they didn’t bother being kind to anyone.

Can you see what this is leading to?

Seeing that Justice is done is about being ready.

Seeing that you share and give away as much as you can is about being ready.

And when you are ready – really ready – the Master who is coming will come in to you and serve you.
Posted by Djittydjitty at 5:02 PM